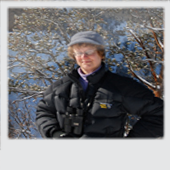 I never had any childhood yearnings toward linguistics, though my friend Molly Mason and I did invent an excellent secret language when we were about 11. No, my yearning was to be a zoologist. But after my one high-school chemistry course, taught by a dreadful person, I swore never to take another one; and a zero-chemistry pledge is a serious hindrance to a career in biology. So in spite of several wonderful college biology courses -- Paul Ehrlich's course in evolution was one of my greatest educational experiences -- I had to find another major. I'd studied French and Latin in high school and German and Russian and Ancient Greek in college, and languages were easy for me; I chose a German major because it'd leave me lots of free time for courses in things like comparative vertebrate anatomy, plant ecology, and invertebrate paleontology.

Then I wrote a term paper on tragedy in Hebbel's Maria Magdalena that my German professor liked a lot. It was, if I do say so myself, a beautiful edifice: elaborate layers of tragedy, all (fairly) well supported by the text. But I didn't believe in any of it; it was just an exercise in inventiveness. I thought it was the best work I could do in literature, and I didn't think it was worth the effort. That same term I took one of the very few linguistics courses that Stanford offered in those days, from the Slavic linguist Cornelius van Schooneveld. I had the strong impression all term that I was understanding essentially nothing in that class -- Jakobson's case cube was especially opaque -- but it gave me a glimpse of an exciting academic world, a world that had the advantage of dealing with facts about languages rather than with slippery literary constructs that didn't lend themselves to testable hypotheses. So when my German professors nominated me for a Woodrow Wilson Fellowship, I wrote my application to do graduate work in linguistics rather than in German literature.

I turned that fellowship down and spent the year after graduation in Germany instead of graduate school, achieving fluency in German, singing (badly) in the Russischer Chor der Universitaet Freiburg, and taking classes in Gothic, Swedish, Hindi, Urdu, and Arabic. During that year my Woodrow Wilson Fellowship was re-awarded, and I had no idea what kind of job I might go looking for, so a paid trip to graduate school seemed like a good plan. I was abysmally ignorant about the whole process of graduate school application, and I had no one to advise me about how to go about it -- not, for instance, my former German professor: he was so shocked by my decision to study linguistics that all he could do was ask, You mean, no literature? No literature at ALL? I wrote to graduate schools more or less at random: Do you have a linguistics department? If so, do you admit women? (This was in 1962, so although both questions were pretty stupid, the second one wasn't necessarily irrelevant.)

I ended up at Yale. This was a good thing, because I found out early on that my main interest was historical linguistics, which then mostly meant Indo-European, and Yale was a terrific place to study Indo-European linguistics in the early 1960s. This was also the time when the old guard, represented by, for instance, my not-so-historically-inclined Yale professors, was about to be swept off the pinnacle of American linguistics by the rise of generative grammar. Bernard Bloch, the head of Yale's linguistics department, urged us graduate students to go to Linguistic Institutes to get some training in what was then transformational grammar, since we couldn't learn it at Yale, and I followed his advice. But I still wanted to be a historical linguist.

I also wanted to learn how to do fieldwork, because I thought (and I guess I still do think, deep down) that to be an all-around linguist you need to do some fieldwork. This urge was a bit of a problem for my emerging Indo-Europeanist persona, because Indo-Europeanists tend to spend most of their time working on dead languages. But I figured I could do fieldwork on something Indo-European. Western Europe was out, because preparing for fieldwork there would take so long (too much literature in too many libraries) that I'd use up all my time without ever getting into the field. I was too timid to go as far afield as, say, India. Eastern Europe seemed like a good compromise: most of the languages had been less intensively studied by American linguists than IE languages of western Europe, and I already knew a little Russian. I studied Old Church Slavic and (the language then known as) SerboCroatian to start turning myself into a Slavist. At the 1964 Linguistic Institute, besides Paul Postal's memorable course in transformational grammar, I took Pavle Ivic's Balkan Linguistics class. That's why I spent the next year in (the former) Yugoslavia, working with Ivic, with a dissertation project on SerboCroatian dialectology.

I did learn how to do fieldwork. I discovered that the best dialect consultants were elderly women who had never been to school, and that their husbands were the worst -- the men would talk to me happily for hours, but they wouldn't answer questions, not from a woman, and their wives wouldn't talk to me while the men were present. On the island Krk I spent half my time hiding behind a low stone wall, waiting until the man of the house set off for the village; then I'd go to the house and interview his wife. In a village near Nis I was viewed as so scrawny that people kept feeding me and urging new-made wine on me, till I was so stuffed and tipsy that I could barely write. In Montenegro the woman I found tending sheep on a hillside within view of Albania refused to tell me what she'd call a man who had a big nose if she didn't like him: God gave him a big nose, she said, and it's not for me to criticize. (That woman also thought I was from the Yugoslav secret police, checking up on border activities, and she didn't really want to talk to me at all. I was flattered but frustrated.) After that year I came home and wrote a contender for the worst linguistics dissertation ever: 200+ pages on noun suffixation, more or less completely devoid of ideas. I nevertheless found a job, though it wasn't easy, and luckily for me the dissertation turned out to be the lowest point in my career. But I didn't remain an Indo-Europeanist, or even a Slavist.

Instead I got hooked on language contact, and I'm still a historical linguist: the vast majority of my publications have been on contact-induced language change. This shift began in 1974. One day that year, while reading something about pidgins and creoles, I decided that understanding these and other contact phenomena is crucial to understanding language change. I'm still convinced that that's true, and much of my effort over the past 3+ decades has been devoted to exploring the area. I find that I'm getting more radical in my views the older I get. I don't know if this is a defensible trajectory, but it's more interesting (for me, at least) than stodginess. I now suspect that speakers can change -- consciously and deliberately -- just about anything in their language that they can become aware of; all they need is a strong enough motive to make dramatic changes.

More recently, but almost thirty years ago now, I also got hooked on Native American languages. This passion started with two articles on North American pidgins, Pidgin Delaware and Chinook Jargon; from there I moved into Salishan linguistics. My goal was to gain enough familiarity with one of the major families in the Northwest to give me a foundation for investigating the history of the Pacific Northwest Sprachbund. I've been doing fieldwork on the Salish-Pend d'Oreille language of Montana, the easternmost Salishan language, every summer since 1980, working with some of its last fluent speakers. It's the most wonderful language, especially for someone like me: I love consonants (vowels leave me cold) and elaborate morphology, and Montana Salish has consonants and morphology to die for. If I can manage to live to about 150, I think I may understand the language pretty well; and then all I need is another hundred years or so to understand the Pacific Northwest Sprachbund. Meanwhile, I'm having a lot of fun.

So I'm still doing both historical linguistics and fieldwork, the ideal professional life I envisioned back in graduate school.