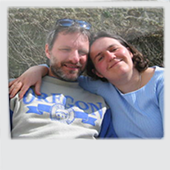 From age 12 to 17 I had plans to become an astronomer, yet my interest in languages started in parallel at age 13 in a French class in Junior High School. After a hiatus of taking the many science and math courses "preferred" by the school counselors, I returned to my deepened interest in languages with advanced French and Spanish at the end of High School. Although it was known that taking language courses would lower the scholastic achievement ranking with respect to peers who continued on with additional science and math courses, I figured that spending my efforts and energy in areas that really interested me was more rewarding.

Working full-time on the side to fund a first Bachelors degree and then a second Bachelors degree in French at Portland State University (PSU), the end of five long years of hard work was rewarded with a sabbatical year in the form of a year-long teaching fellowship from the French Ministry of Education awarded through PSU. That year provided the chance to audit a post-bac certificate in Teaching French as a Foreign Language at the Université Lyon 2, take some introductory linguistics courses and an immersion Swahili course, and to travel several times throughout Europe and practice the language skills learned over the years. At mid-year, a long-time friend (fellow Linguist-list member Loren Billings) dropped by in France for a few days on a trip through Europe and literally set the hook for my future path in linguistics.

It was necessary to make up for the lack of an undergraduate degree in linguistics, and the obvious solution was taking the next intensive Summer Institute of Linguistics (SIL) session in summer 1990. Upon returning to PSU with a teaching assistantship in Fall 90, the focus all year was to take all available theoretical linguistics, while discovering and specializing in Sociolinguistics and Creole languages, and led to completing coursework and exams for an MA in Applied Linguistics.

Then back to France for a few more years to complete both Maîtrise (MA) and DEA (MPhil doctoral) degrees in Linguistics at the Université Lyon 2 with a specialization in Creolistics, while teaching linguistics and business language courses and also working part-time as a translator. During that period of time, the opportunity to head up, set up from scratch and teach the entire Sociolinguistics program at the French branch of SIL was an invaluable experience. In the meantime, a long-term daily commitment to a bilingual, bicultural life began, and my French bride was willing to leave the cheese, baguettes and wine of her homeland to return with me to live out next to the cornfields in the US. We went to Indiana University-Bloomington for me to talk on an associate teaching instructor position in French with an opportunity for a Creole Research assistantship.

Then for a few reasons, I decided to leave academia and jump into industry. It was at that point in late 1994 that I joined LINGUIST and found a job as a linguist and professional trainer on the Controlled Language and Machine Translation (MT) projects deployed at Caterpillar Inc by the Center for Machine Translation of Carnegie Mellon University (CMU). Then 2 years later, CMU gave me a call with an incredible proposal to work on an English > Haitian Creole speech-to-speech MT system, along with several other language pairs. An impossible offer to refuse, we packed up and moved to Pittsburgh, Pennsylvania. Moving back to France a couple of years later for personal reasons meant another career move to be Technical Director of the Evaluations and Language Resources Association (ELRA) and Distribution Agency (ELDA) to manage the funding, production, validation and packaging of speech and text databases for Natural Language Processing systems. Another move back to the MT field as Project Director at Softissimo (software publisher of commercial Reverso MT software), with a simultaneous role as CEO of Mason Integrated Technologies (MIT2) which aimed to provide language engineering products and services for minority languages, initially focused on Creole languages.

September 2001 came with the big blow of 911 which had disastrous effects on the language industry at large, and led me to switch to the field of datawarehousing and business intelligence reporting solutions for the Wireless Telecom sector. During these past 5 years while working in the telecom field, I finished a PhD in Linguistics and an MS in Telecommunications and have continued to conduct MT implementation projects and publish case study reports on them, set up the Language Technology Software Evaluation site, serve on LINGUIST's panel of advisors and on the advisory board of MultiLingual (recently renamed from MultiLingual Computing & Technology), and moderate several MT User group forums.

As I look back over the past 15 years, several of the positions mentioned above came through LL announcements, as well as new prospect opportunities on the horizon in order to return full-time to the field of linguistics. Thank you LL for making those career opportunities available. Over the past year, it has been a pleasure to let the LINGUIST-List (LL) team tap into my experience concerning technical, operational, organizational and business aspects of moving forward with future LL plans. We have managed to put into place some of the ideas with some positive results, and I look forward to the coming year to help in additional areas on making LL a more financially self-supporting and sustaining organization.