University of Louisiana at Lafayette 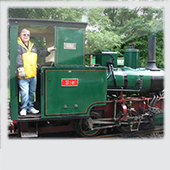 I was born in the heart of Welsh-speaking Wales (Tywyn in Meirionydd), but my family moved to southern England not long afterwards. This move was a cause of some dismay to me when I first became aware of other languages (I started French in primary school - so quite early on!). I was really miffed that we hadn't stayed long enough for me to acquire this interesting language. So, from the age of 11 or so, I set to with a Teach Yourself Welsh book, BBC Radio Wales courses (which you could hear even in Exeter, Devon), and much later on an intensive Wlpan course in Cardiff. So, starting on a journey of learning 'iaith yr angylion' led me to an interest in other languages. Like others who have written for this feature, I became a devourer of language manuals from the local library, and eventually discovered books on linguistics.

My undergraduate degree was in Linguistics and English literature at what was then the University College of North Wales, Bangor, and is now Bangor University. I studied under great teachers such as Alan Thomas, Ken Albrow, Robert Owen Jones and Tony Bladon. These scholars fostered a particular interest in phonetics and sociolinguistics in me. I determined to follow up my undergraduate degree with further studies in these areas, and took up a place on the Master's program in Linguistics and Phonetics at the University of Essex, under the excellent leadership of Mark Tatham and Kate Morton. I was lucky enough also to meet Chris Code at this time, then a fellow student on the Master's program. He is now a leading aphasiologist; back then, he helped introduce me to the field of communication disorders, and he has remained a lifelong friend and academic collaborator.

Almost immediately I finished at Essex I was offered an assistant lectureship in linguistics at a university in Libya. An interesting year spent deep in the Sahara was followed by the offer of a lectureship at the Cardiff School of Speech Therapy - a chance to get back to Wales couldn't be missed! Here I was able to combine my academic interests in Welsh and in communication disorders. Indeed, as the program was about to undergo accreditation I had to immerse myself into the then relatively new field of clinical linguistics. Luckily, I got help from the writings of David Crystal (later, I was lucky enough to meet and collaborate with David), and from meetings with Pam Grunwell - a pioneer in the field of clinical phonetics and phonology. So, by the early eighties I felt I had a grip on teaching clinical linguistics and phonetics and therefore enrolled part-time in a doctoral program at University College Cardiff (now Cardiff University). I was fortunate to have Prof Glyn Jones as my Advisor - one of the most influential linguists working on Welsh of recent times. He was not only a great mentor and friend, but patiently helped correct my Welsh on those occasions that I ventured to present papers at conferences or prepare articles for publication in the language. My dissertation was a sociolinguistic study of the initial consonant mutation system of modern spoken Welsh. In the mid-eighties I attended a conference on minority languages held at the National University of Ireland in Galway. There I met my future wife, Nicole Mueller, who was a scholar of medieval Irish and Welsh - but later also became a clinical linguist. We have clearly started a trend of moving from Celtic to Clinical!

In the late eighties I spent a few years teaching at what is now the University of Glamorgan, and in 1992 I moved to the University of Ulster. There I was promoted in quick succession to Reader then full Professor. I had the opportunity to become course director of a brand new program in Linguistics that ran alongside the Speech Pathology program. By the late nineties I was based in Ireland (though my interests were in Welsh), and my wife held a post at Cardiff University Wales (though her interests were in Irish)! So, to solve this dilemma we both moved to Lafayette, Louisiana! Instrumental in this move was our friend Jack Damico, and we have been able to collaborate with him on various projects, including articles, books, a book series and a journal.

Here at the University of Louisiana at Lafayette we have undergraduate, Master's, and doctoral programs in Communication Disorders. The ability to work with doctoral students interested in clinical linguistics has been especially rewarding. I'm also co-editing two journals, and two book series with colleagues here and elsewhere in Louisiana, and these keep me busy! However, linguistics isn't all I have time for - as the photo shows, I also like preserved railways. I'm on the footplate of a steam locomotive on the Lynton and Barnstaple Railway in north Devon, England, in the picture. (Yes, academics are just like the characters in the 'Big Bang Theory'...)

It's a long way from 'Teach Yourself Welsh' to professor of clinical linguistics, and I have to admit to fair amount of being in the right place at the right time. But, mostly it was having the good fortune to have good teachers and good mentors, and parents able to help me through college and graduate school!