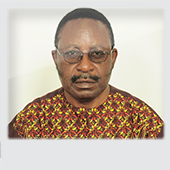 My late father used to tell me, when I was a teenager, that I should follow my passion and not my instinct. What he meant was that I should pursue what fascinated me most and not what I thought to be my natural career. That became true when I went for my senior secondary school. I thought I was talented in music, as I played the organ in Church and had composed local music for the school brass band. But my interest in music faded as soon as I went to University.

However, what had fascinated me most, during my secondary school days, was the multitude of languages that the students spoke. The students came from at least 10 different language backgrounds. Although the lingua franca was Kiswahili, many spoke Shisukuma, my mother tongue, which was dominant in the area, spoken by over 3 million people. Many of the non Shisukuma playmates were even more fluent in Shisukuma than in their own languages and some seemed to lose their identity in favour of that of Shisukuma.

I wondered why the speakers of the smaller languages were proficient in Shisukuma, but not the other way round. The only other languages I knew, apart from Shisukuma, were Kiswahili and English. Some of my playmates spoke as many as five languages.

During my secondary school education, I was exposed to a number of other languages, namely, French, Spanish, Latin and classical Greek, as the school was a Seminary and championed at teaching many tongues to its students. The exposure to many languages permitted me to compare between the forms and structures of these languages in term of order and complexity. I was puzzled that the levels of complexity differed from language to language. I spent more time memorizing declensions and conjugations in Latin and Greek, but had an easier time with the grammatical features attached to English or Kiswahili. This trigged in me the curiosity about the unique system and behaviour of each language. I convinced myself that if God created every person differently, so did he make languages different from each other. This fascination about languages slowly gave me the drive to investigate the nature and functioning of language and how languages were interrelated.

At the University of Dar-es-salaam that I joined after high school, there was no Linguistics as a single discipline. Linguistics was done as part of English or French study. I chose to do French and linguistics, as French was another subject that excited me. I considered it to be romantic and flowery.

When I completed my undergraduate studies at the University of Dar-es-Salaam, I was appointed a Staff Development Fellow in the Department of Foreign Languages and Linguistics, to specialize in the teaching of French in the Department. A scholarship was arranged for me to proceed for my graduate studies at the famous La Sorbonne University, in Paris, where I would study French and the teaching of French as a foreign language.

Before my departure for Paris, I was invited to attend a conference which was taking place in Limuru, Kenya, on African Linguistics. Prof. Ayo Bamgbose from Nigeria and Prof. Gilbert Ansre from Ghana were among the few Africans at that gathering, being the pioneering African scholars in Linguistics. Both of them were surprised that I was going to Paris to specialize in French, when the bulk of the indigenous languages in Tanzania and Africa had no any meaningful description or codification. They convinced me that rather than specialize in French studies, I should focus more on linguistics. I still went to the La Sorbonne University, but focused more on General and African Linguistics. At that time, Parisian linguistics was heavily influenced by the School of Prague perspectives. The main proponents were Professors André Martinet, Emile Benvenie, Bertil Malmberg and Jean Perrot. In the area of African and Bantu linguistics, I was taught by renowned Professors, like Serge Sauvageot, Pierre Alexandre, Jacqueline Thomas and Luc Bouquiaux.

Being in Paris, I was also privileged to meet and learn from famous linguists, like Noam Chomsky, Kenneth Pike, Peter Ladefoged, Michael Halliday, Larry Hyman and others. My being able to speak both English and French gave me enormous advantage in the scope of my reading and discussing with other scholars. Also my basic knowledge of Latin, classical Greek and German, which I did during my secondary school days, became an asset in comparing between word and syntactic categories and structures.

From the above, I can say that my focus on general and African linguistics was prompted by the advices given by the senior colleagues at the Limuru conference. Although I was very fascinated by theoretical linguistics, especially the generative approach, I became conscious that, in Africa, we needed to focus more on descriptive and sociolinguistic aspects, in order to respond to national and community issues, as well as use the indigenous languages as resources and vehicles for socio-economic development.

After my studies in Paris, I returned to Tanzania and was appointed Lecturer in African Linguistics. I became instrumental in the promotion of Kiswahili as national language of Tanzania and regional language for most of Eastern and Central Africa. I also carried out extensive descriptive and sociolinguistic surveys of the other indigenous languages which numbered over 120 in Tanzania. I was particularly concerned about the highly endangered languages in the country, especially as Kiswahili, as both lingua franca and national language, was predominating and marginalizing all the other languages, as it assumed most of the communicative domains.

After working for over 17 years in Tanzania, I decided to move to the University of Botswana, to meet new experiences and challenges. The Botswana linguistic scenario was identical in many ways to that of Tanzania, as they also had a single dominant language which enjoyed most privileges. The majority of the other indigenous languages were in a critically endangered position. The problem was compounded by the small size and vulnerable nature of the minority languages. Hence my research was directed towards crucial linguistic phenomena like language domination, patterns of language use, the role of language attitudes, the processes of language shift and the measures which could reverse this trend. I came up with interesting results, remembering my late father's advice to follow my passion.