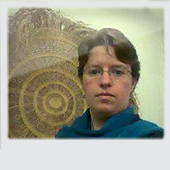 I have a fairly typical background for an Australianist: my linguistics training really began in classics. I took Latin and Greek as an undergraduate at the Australian National University, but "just in case" I also enrolled in an English major and an introductory linguistics class. I very quickly found out that I didn't really like writing the sort of essays that literature departments wanted. On the other hand, I thought that the sorts of things I was learning about languages was incredibly cool (for example, that there were languages that marked tense with tone changes rather than affixes, and that in addition to common-or-garden "past", "present" and "future" there were languages that marked "tomorrow around dawn" or "later today"). I also found it a little hard to believe (but was pleasantly surprised to learn) that there were people who were paid to think about languages as systems, not just as something that people write literature in.

At that point I was still hooked on historical study and classical languages. Then in my third year, when I was thinking about a fourth year honours thesis topic, Harold Koch suggested I do something on historical linguistics related to Australian languages, and he suggested reconstructing a subgroup of Pama-Nyungan. That was definitely being thrown in the deep end! We weren't sure how many languages were in the subgroup, how different they were from each other, and much of the data for the study had to be extracted from fieldnotes where dot matrix ink dots from the other side of the page were showing though - that's a problem when dots are used to indicate retroflection! I was totally hooked on this sort of work (and epigraphy came in handy!). Before that I don't think it had really occurred to me that there were major language families where the answers for even the most basic questions of prehistory were things you had to work out from scratch rather than going to the library for.

I don't think I ever consciously decided to apply to grad school - it was the logical thing to do after being obsessed by pronouns and case morphology for a year. I applied to a few US grad schools and Oxford, and got into Harvard, a program ideal for my interests, since there was not only an active historical research group but also Ken Hale at MIT down the road.

I got into fieldwork almost by accident. I had a bit less than a year between finishing my undergraduate degree in Australia and applying to Northern Hemisphere graduate schools. Luise Hercus asked if I'd like to go with her on a field trip to Western Queensland. I learnt a lot of useful field skills there, most of them non-linguistic, I must admit (like how to pick up injured cockatoos, lying strategically about my age, and the best ways to avoid drunk truck drivers). Shortly after I had the chance to go to Western Australia to do some volunteer work with the Kimberley Language Resource Centre. I was editing Bardi language texts for a school story book. It was a great way to learn the language and to meet potential future consultants in a context, to do applied work in a community while also thinking about theoretical issues. I was also lucky to have a graduate advisor (Jay Jasanoff) who encouraged combining fieldwork and historical work.

Above all I think becoming a linguist (rather than some other type of -ist or -ologist) was a matter of being in the right place at the right time, having fantastic mentors, being able to work on problems that required the type of analysis I'm good at, and finding something where it's possible to combine serious intellectual work with work that's also useful to others.