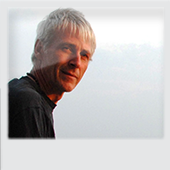 It was about one and a half years ago that I finally I arrived where I had always wanted to be and do what I had always wanted - teach students, support small language communities and conduct research on African languages on my doorstep. The University of Cape Town and my new colleagues welcomed my efforts to establish the Centre for African Language Diversity – CALDi as well as The African Language Archive – TALA and I was recently appointed the Mellon Research Chair: African Language Diversity this initiative. The main aim of CALDi is to train young African scholars in descriptive linguistics and open up space for research into African languages at UCT with the hopes of countering the dominance of African linguistics outside the continent. It has been a great challenge for which my whole career has been a form of preparation.

I was born (1957) in Baiertal a small village squeezed into a narrow valley between the Black Forest and the Odenwald mountain range, not far from Heidelberg (Germany), and I I felt alien there as far back as I can remember. I grew up with an urge to escape and when a Catholic priest came to our small school and showed slides from Portugal, I knew I had to go there. I had, however, misunderstood and thought the pictures where from somewhere in Africa. At the age of 11, I was sent to a Catholic boarding school a long way from home where I was taught by retired, often frustrated missionaries. From then on, I rarely went back to visit my home village. After about four years I was discharged from the mission school, most likely because I was not Catholic enough. For several years I lived in the servants’ chamber of a farm above the pigs stable, but somehow I still managed to attend and also complete high school. After that I travelled extensively in Asia and Africa and it was on these trips that I developed a serious interest in languages, driven by the desire to understand the thoughts of the people I encountered from all these different cultures.

In 1980, while passing through Tanzania on my way to Zambia, I had my first encounter with an Africanist when I met Herman Batibo, who taught African linguistics at the University of Dar Es Salaam. On my return to Germany I went straight to the University of Cologne where Bernd Heine welcomed me to his Institute of African Language Studies. The institute soon became the centre of my world and remained so for 28 years. No other person has had a greater impact on my life - we became friends from the first day we met and our close friendship continues to this day. Bernd is a linguist 24/7, needs very little sleep and is highly efficient in what he does. Above all he is brilliant thinker and all this results in his enormous research output with regard to quality and quantity; but what I admire most about him is his generosity in sharing his vast knowledge with everyone without discrimination on any grounds.

Right from the beginning of my own research into African languages, I focused on languages spoken by marginalized communities in remote areas. I enjoy being in remote places in mountain regions, in semi-desert regions or in the deep bush. I have often spent many months in settlements without electricity and limited water supply.

My first fieldtrip took me to the Marakwet in the Cherangany hills of Kenya followed by several trips to visit speakers of Ma’a-Mbugu in the Usambara Mountains of Tanzania. Fieldwork near Mount Kenya on Mukogodo Maasai and Yaaku came next. Honey and bees are to these former hunter-gatherers what milk and cattle are for pastoralists: precious commodities and extremely important in their daily lives and thinking. For that reason, the special vocabularies for traditional beekeeping and honey hunting were my main interests for several years. Together with Mukogodo hunters, I followed honey guides, small birds that are known throughout the African continent for leading humans and honey badgers to wild bee nests. After harvesting the honey, the birds expect their share as reward for their service. For linguists it is important to participate in such important cultural activities, in order to be able to understand stories, technical terms and most importantly, to get an idea of the specific concepts that are underlying the languages they study.

In the early 1990s, while I was teaching at the University of Addis Ababa, I conducted fieldwork in Southern Ethiopia and collected language data on several little-known languages. Bayso and Harro are both spoken by small communities on the Giddicho Island in Lake Abaya. When the new transitional government of Ethiopia approved its new liberal language policy in 1993, I was more than happy to support the implementation of mother-tongue education. As a language consultant I visited hundreds of schools all over Southern Ethiopia and collected information on the distribution and use of languages use as well as speaker attitudes towards those languages. I interviewed teachers, students and parents, and it has been great to see that my research findings have had a direct impact on the languages used in some schools. This is very rare in the kind of studies we are usually involved in.

A year later a new phase in my research career opened up when I began working on the Khoeid, !Xun and !Gui-Taa, language families, most commonly referred to as the Khoisan languages of Southern Africa. I spent many months with Khwe and &##47;&##47;Ani in Namibia and Botswana and analysed and described various aspects of their language. Together with the community, I developed a practical orthography for Khwe-&##47;&##47;Ani, which then became a written language on 15th September 1996. Since then I have contributed to community publications on and in the Khwe-&##47;&##47;Ani language. In my view, supporting community efforts to develop their language is an important duty for linguists today. The most difficult aspect in long-term fieldwork for me is to deal with all the friends and language consultants who are dying at a young age. Members of marginalized communities on the African continent generally have much shorter life expectancies than the national averages. Poverty and hazardous environments result in malnutrition and high rates of tropical diseases, as well as AIDS. <br /><br /> I had already observed on my first field trip that young members of many of the small language communities no longer acquired the ethnic languages of previous generations. I found that unlike language shift in most other parts of the world, English was no threat to small African languages, at least at that time. African languages were instead replacing other African languages. As a result, I became involved in UNESCO initiatives on Endangered Languages and supported the establishment of the Endangered Language Section in UNESCO&rsquo;s Intangible Cultural Heritage Unit right from the beginning. In 1995 the Red Book of Endangered Languages was launched at the University of Tokyo and a year later, the very rough first edition of UNESCO&rsquo;s Atlas of the World&rsquo;s Languages in Danger of Disappearing was edited by the late Stephen Wurm. He was instrumental in advancing UNESCO&rsquo;s activities and I remember his frequent phone calls from Australia to Germany, much to my wife&rsquo;s consternation as they came always in the middle of the night and went on for hours. <br /><br /> Christopher Moseley edited a significantly improved edition of the UNESCO Atlas of the World&rsquo;s Languages in Danger in 2010 and invited me as the regional expert for Africa. Since then, the online version has been constantly revised and updated and I am responsible for the section on the African continent south of the Sahara. In 2009, Lyle Campbell, Helen Aristar-Dry and Anthony Aristar developed the Catalogue of Endangered Languages (ELCat) project, which was launched in 2011 by the` University of Hawaii, The Linguist List and Google. The aim of ELCat is to provide detailed information on endangered languages worldwide and Anna Belew from the Linguist List is doing a great job in coordinating inputs from the regional directors, as which I serve for the African continent. While the ELCat and UNESCO overviews on language endangerment make no difference for the languages and their situations, they do an important job in raising awareness and also assisting in the development language documentation projects. <br /><br /> Another long-term professional commitment close to my heart concerns the World Congress of African Linguistics &ndash; WOCAL, which is held every three years. I consider WOCAL to be of eminent importance since it constitutes the only truly international and pan-theoretical Congress of African Linguistics. By organizing summer schools and special workshops at the WOCAL congresses for young linguists, I have supported the participation of scholars from African universities since its inception in 1993. For the last 10 years I have served as General Secretary of WOCAL and ensuring a strong representation of African scholars at the congresses is one of my main concerns. <br /><br /> Amongst all the linguists profiled on the Linguist List, one sees an absolute commitment to the study of language and languages. Like them, I feel particularly fortunate to have been able to forge a career in such a fascinating field of study. Although I have spent a lot of time in the far flung corners of the world studying languages and cultures most people have never heard of, my career in linguistics has given me the opportunity to fulfil my childhood dreams whilst bringing into sharp focus the very important issues of language endangerment. <br /><br /> </p> </div> <div class="col-sm-2 sidenav"> </div> </div> </div> </div> <script src="/static/js/libs/jquery-2.1.3.min.js"></script> <script src="/static/js/libs/jquery-ui.min.js"></script> <script src="https://maxcdn.bootstrapcdn.com/bootstrap/3.3.7/js/bootstrap.min.js" integrity="sha384-Tc5IQib027qvyjSMfHjOMaLkfuWVxZxUPnCJA7l2mCWNIpG9mGCD8wGNIcPD7Txa" crossorigin="anonymous"></script> <script type="text/javascript" src="/static/js/plugins/bootstrap-multiselect.js"></script> <script type="text/javascript" src="/static/js/plugins/jquery.jscroll.js"></script> <script type="text/javascript" src="/static/js/app.js"></script> <script src="/static/js/select2.full.min.js"></script> <script type="text/javascript" src="/static/js/selection.js"></script> <footer id="page-footer"> <div class="container text-center"> <ul class="list-unstyled"> <li class="btn-group dropup pull-left"> <span class="glyphicon glyphicon-globe" aria-hidden="true"></span> <a href="" class="dropdown-toggle" data-toggle="dropdown">Language<i class="fa fa-caret-up" aria-hidden="true" style="margin-left: 2px; font-size: x-small"></i></a> <ul class="dropdown-menu"> <li class="lang"> <form name="setLangEnglish" action="/i18n/setlang/" method="POST"><input type='hidden' name='csrfmiddlewaretoken' value='m6Um3yeDehvHOCrqimWmenL61ztPd6rKe0zEXtuQyRPS6j3kqtrYVd4Tmu176VrN' /> <input type="hidden" name="language" value="en" /> <a class="language" href="#" onclick="document.setLangEnglish.submit();return false;">English</a> </form> </li> <li class="lang"> <form name="setLangDeutsch" action="/i18n/setlang/" method="POST"><input type='hidden' name='csrfmiddlewaretoken' value='m6Um3yeDehvHOCrqimWmenL61ztPd6rKe0zEXtuQyRPS6j3kqtrYVd4Tmu176VrN' /> <input type="hidden" name="language" value="de" /> <a class="language" href="#" onclick="document.setLangDeutsch.submit();return false;">Deutsch</a> </form> </li> <li class="lang"> <form name="setLangEspañol" action="/i18n/setlang/" method="POST"><input type='hidden' name='csrfmiddlewaretoken' value='m6Um3yeDehvHOCrqimWmenL61ztPd6rKe0zEXtuQyRPS6j3kqtrYVd4Tmu176VrN' /> <input type="hidden" name="language" value="es" /> <a class="language" href="#" onclick="document.setLangEspañol.submit();return false;">Español</a> </form> </li> <li class="lang"> <form name="setLang汉语" action="/i18n/setlang/" method="POST"><input type='hidden' name='csrfmiddlewaretoken' value='m6Um3yeDehvHOCrqimWmenL61ztPd6rKe0zEXtuQyRPS6j3kqtrYVd4Tmu176VrN' /> <input type="hidden" name="language" value="zh-cn" /> <a class="language" href="#" onclick="document.setLang汉语.submit();return false;">汉语</a> </form> </li> <li class="lang"> <form name="setLangမြန်မာ" action="/i18n/setlang/" method="POST"><input type='hidden' name='csrfmiddlewaretoken' value='m6Um3yeDehvHOCrqimWmenL61ztPd6rKe0zEXtuQyRPS6j3kqtrYVd4Tmu176VrN' /> <input type="hidden" name="language" value="my" /> <a class="language" href="#" onclick="document.setLangမြန်မာ.submit();return false;">မြန်မာ</a> </form> </li> <li class="lang"> <form name="setLangPolski" action="/i18n/setlang/" method="POST"><input type='hidden' name='csrfmiddlewaretoken' value='m6Um3yeDehvHOCrqimWmenL61ztPd6rKe0zEXtuQyRPS6j3kqtrYVd4Tmu176VrN' /> <input type="hidden" name="language" value="pl" /> <a class="language" href="#" onclick="document.setLangPolski.submit();return false;">Polski</a> </form> </li> <li class="lang"> <form name="setLangHrvatski" action="/i18n/setlang/" method="POST"><input type='hidden' name='csrfmiddlewaretoken' value='m6Um3yeDehvHOCrqimWmenL61ztPd6rKe0zEXtuQyRPS6j3kqtrYVd4Tmu176VrN' /> <input type="hidden" name="language" value="hr" /> <a class="language" href="#" onclick="document.setLangHrvatski.submit();return false;">Hrvatski</a> </form> </li> </ul> </li> <li class="pull-left"> <a href="/policies/">Policies</a> </li> <li class="pull-left"> <a href="/cookies/">Cookies</a> </li> <li class="pull-left"> <a href="/about/#contact">Contact</a> </li> <li class="socialmedia pull-right"> <a href="https://www.facebook.com/linguistlist" class="social-icon"><i class="fa fa-facebook" alt="Facebook"></i></a> <a href="https://twitter.com/linguistlist" class="social-icon"><i class="fa fa-twitter" alt="Twitter"></i></a> <a href="https://www.linkedin.com/company/linguist-list" class="social-icon"><i class="fa fa-linkedin" alt="Linkedin"></i></a> <a href="https://linguistlist-blog.tumblr.com/" class="social-icon"><i class="fa fa-tumblr" alt="Tumblr"></i></a> <a href="https://www.youtube.com/user/linguistlist" class="social-icon"><i class="fa fa-youtube" alt="Youtube"></i></a> <a href="http://blog.linguistlist.org/" class="social-icon"><i class="fa fa-wordpress" alt="Wordpress"></i></a> <a href="/rss/" class="social-icon"><i class="fa fa-rss" alt="RSS feed"></i></a> <a href="https://www.amazon.com/The-LINGUIST-List/dp/B01MT4EOQZ" class="social-icon"><i class="fa fa-amazon" alt="Amazon Echo"></i></a> <a href="http://news.linguistlist.org/" class="social-icon"><i class="fa fa-newspaper-o" alt="Linguist List News Ticker"></i></a> </li> </ul> </div> </footer> </body> </html>