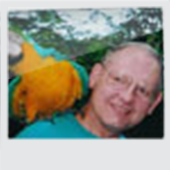 I grew up in the woods in Oregon, in the sputnik era, so naturally I intended to be an astronaut and a physicist. Somehow, however, I decided against physics (not outdoors enough) and ended up doing a BA in archaeology/anthropology, with strange antiquarian notions about how to get at the past via ancient languages and things in addition to plain dirt archaeology (not exactly how insiders saw archaeology). But then, I decided that I wanted to be relevant, that as fascinating as archaeology was, I wanted to do something that would benefit people.

Since I had already taken linguistics courses (part of anthropology) and had dabbled with several languages, I switched to linguistics for graduate school, expecting to use it to help suffering indigenous peoples with things like literacy programs aimed at health programs. I soon discovered that I disapproved of the results of several would-be do-gooder outsiders' efforts at "helping" Indians (leading me to doubt whether my understanding of what was good for other peoples was any better than theirs). In any case, it was extremely difficult to achieve any results in Latin American countries where the sorts of changes needed would require wholesale mind-set overhauls on the part of bureaucracies and governments, making significant results difficult, not easily achieved by lowly lone foreign linguists.

But by then I was hooked on the intellectual stimulation of linguistic theory and happily engaged in generative phonology, explanation of linguistic change, and the like. Initially, I was torn between American Indian languages and Finnish/Finno-Ugric. I studied Finnish long and with dedication, and wrote a generative phonology of Finnish for my MA thesis (U of Washington). However, my advisor, Meri Lehtinen, told me I probably would not amount to much of a Finno-Ugricist. Since my German was (then) bad, I didn't know Hungarian, and only very limited Russian, I, having by then been a research assistant on projects to write pedagogical grammars of Quechua and Kaqchikel for the Peace Corps, happily made American Indian linguistics my language area specialization. There was much more that needed to be done there anyway, though some years later, as a Fulbright scholar in Finland, I found that Finnish scholars were quite happy to have people working in the field with limitations such as mine. So ever after Finnish and Finno-Ugric remained a sort of scholarly hobby and a source of inspiration and examples for me, though my language research was mostly divided between fieldwork for documenting various Latin American Indian languages, especially endangered ones, and historical linguistic research on them, with a dissertation on the historical linguistics of the 8 K'ichean (branch of Mayan) languages, later a long series of research grants on endangered Mesoamerican Indian languages of various families.

As a postscript, it is personally rewarding to me now to be the director of the Center for American Indian Languages here at the U of Utah, where finally I feel that my work and that fostered by CAIL is relevant -- documenting endangered Native American languages and working with community members where languages are endangered towards linguistic revitalization and making the documentation materials accessible and relevant to their language education needs.