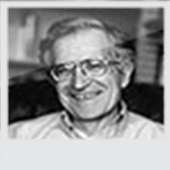 The basic outlines are simple enough. As a 17-year old sophomore in 1946, I was pretty much disillusioned with college and thinking of dropping out. Through shared political interests, I met Zellig Harris, and in conversation became interested in his linguistic work, at first his history of Canaanite dialects, which related to matters I had some familiarity with, having read my father's doctoral dissertation on the 13th century Hebrew grammarian David Kimhi and other work on Semitic linguistics; and the one freshman course that I really found engaging was Arabic, with a fine scholar, Giorgio Levi della Vida.

Harris suggested that I proof-read his Methods of Structural Linguistics, my introduction to the modern field, and take his graduate courses, then on discourse analysis. He also suggested that I take graduate courses with several outstanding figures at the university, among them Nelson Goodman (philosophy) and Nathan Fine (mathematics), which I also did. By then the enthusiasm had returned -- and in retrospect, I suspect that Harris, a remarkable person who had an enormous influence on a great many young people, was subtly inducing me to go on in college.

By 1948 I was also working on my own on an undergraduate thesis, a generative grammar of Modern Hebrew, mostly morphophonemics (revised 1951 version published in 1979). And then on from there.