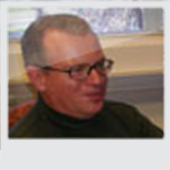 I grew up in and around Sunderland in the northeast of England, in an area where everyone else was interested primarily in soccer. I wasn't. According to my mother, from an early age I pestered her to impart some of her school French to me. When I was 8 she succumbed even to the extent of taking me on a week's holiday to France! From then on, I was hooked on languages, and took just about every one it was possible to take at the grammar school I attended-- not just the ones they offered officially, which were French and Latin, but anything else a teacher was competent to teach. (Fortunately, one French teacher could teach German, another Russian, and the Latin teachers could teach Greek. My only regret is not being more persistent in persuading one of the English teachers, a native speaker of Welsh, to teach me some of his language.)

The local public library was a useful, if limited, source of grammars and manuals for finding out about various languages, and when I was in my mid-teens I also started devouring whatever they had on linguistics, first of all general works like Jespersen, finally discovering that there really is a subject called linguistics when the library got the first edition of Robins' Introduction to General Linguistics. My first typological project came when the Greek teacher asked if there were any other languages like Ancient Greek where an inanimate plural subject takes a singular verb; I discovered that I actually enjoyed spending a Saturday among the grammars in the library gathering relevant data! I finished school a year early and got to spend the next year at a school in Germany, my first extended visit in a non-English-speaking environment. (In my self-constructed mythology, I ran away from home at the age of 17 to become a linguist, but there are other interpretations.)

As an undergraduate at the University of Cambridge studying modern languages, the flexibility of the program allowed me to spend nearly all my time studying linguistics and the histories of various languages, and also gave me my first opportunity to visit Russia. In graduate school I worked on the linguistics of Russian, including a year spent as an exchange student at Moscow State University. Although I was working mainly on generative grammar of Russian, and wrote my doctoral dissertation on this, I was becoming increasingly sidetracked by the attractions of other languages (including other languages of the then USSR during my year in Moscow) and by typology - Greenberg's seminal paper on word order typology was my first substantial introduction, soon to be followed by the experience of having the office next to Ed Keenan in the King's College Research Centre, which convinced me that typology could be a serious pursuit for grown people. Since then, my love of languages and linguistics has taken me to many of the corners of the world, whether to do fieldwork (including a one year project in Papua New Guinea) or to give lectures and consult in places as far-flung as Dunedin, Tromsø, Stellenbosch, and Ypsilanti. Become a linguist and see the world!

Was there anything missing from my early years as a budding linguist in Sunderland, the only linguist surrounded by soccer fans? Well, it was a lonely existence. Just imagine, if on that weekend in the early 1960s I'd been able to send a message to all the linguists in the world asking them to send me information on languages where inanimate plural subjects take singular verbs. In those days, an idle dream. But not now-- thanks to the LINGUIST List!