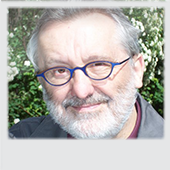 Photo credit: © Jolanta Bachan, 2010, Poznań, all rights reserved
How to become a linguist: some complicated ways

Why and how did I become a linguist? Coincidences? Parental heritage? Because I was no good at drawing freehand maps of Australia? Because of a love affair as a student? Discourse theorists say that we regularly reconstruct our past so that it makes sense as a coherent story. That is what I am doing right now, trying to weave many unrelated strands together into the compact magic carpet which has carried me through my career. As a Welsh Baptist minister, my father moved between chapels in Yorkshire (where he met my mother and I was born), London, Yorkshire again (where I went to elementary school), Wales and Norfolk (where in both cases I went to secondary school), before I went to King's College, University of London, to study German and French. The family environment was and is very aware of linguistic and cultural diversity -- in fact my siblings are scattered around the world today in four countries and three continents. My first contact with other languages was obviously through my father, who learned English as a foreign language in school but (unfortunately) did not speak Welsh at home, and my Welsh farming grandparents, who normally spoke Welsh, but (unfortunately) switched to English when we arrived for the summer holidays.

I was unaware of being party to language endangerment at that time: I learned Welsh at secondary school, and was not particularly fluent, though as an older pupil, when it was my turn to read from the Welsh Bible my reading (possibly with a slight Yorkshire accent?) was apparently highly convincing --an early mark of a future phonetician, maybe, or perhaps of a future text-to-speech synthesis researcher? Welsh has (fortunately) lost its acute endangerment status in the meantime, unaided by me.

My languages in school were English, German (which I selected in preference to Geography for reasons hinted at in the first sentence above), French, Latin and Welsh. Languages and physics were my strong points, and my knowledge of some areas of physics (later enhanced by a hobby: amateur radio) was of inestimable value for my later research in computational linguistics, phonetics and speech technology.

At King's my interest was initially in German and French literature and in theology, and of course in 1960s hippie and rock culture (anyone remember the Holy Ground Club in Notting Hill?) and the 1968 anti-war demonstrations. I rapidly became fascinated by the history of languages, both in my courses and in intercollegiate lectures. During a study year abroad at Erlangen University, Germany, I not only came into contact with the German dialects I had already studied but fell in love with a young lady from Kalamazoo who perchance introduced me to her professor of English Studies, who in turn employed me to teach conversation classes. Subsequently, by a remarkable coincidence, the professor, Theodor Wolpers, had moved to Göttingen when I applied to Göttingen University for a lector's position three years later, and employed me again.

After two years of lectoring and taking courses in philosophy and Indo-European studies, another fortunate coincidence occurred. In 1970 the late Tom Gardner, linguist and artist, left his colleagues Ilse Lehiste, Chuck Fillmore, Arnold Zwicky, and David Stampe in the fertile Ohio State University niche and came to Göttingen. Tom was the strongest formative influence on my linguistic development. He immediately decided I needed to do 'real linguistics', 'real logic', 'real computational stuff', and after a while I became employable in this field. Tom's mentoring led to a doctorate on prosody and later to various jobs in Göttingen, Cologne ('Theory and Practice of Translation') and, in the early 1980s, Bielefeld ('English and General Linguistics'), where I have since been enjoying my family, my teaching, researching and publishing in computational linguistics, language documentation and speech technology, and my travelling and guitar playing.

During this time I have had the great good fortune to meet and work with excellent doctoral students and distinguished linguists from all corners of the globe (Poland, Ivory Coast, Nigeria, Canada, U.S.A., Jordan, Taiwan, ...) as well as Europe, and to participate in many funded international projects, such as SAM (of SAMPA fame), EAGLES, VerbMobil, E-MELD, DoBeS, FLaReNet, ABUILD (and others can be googled). These projects have provided the material basis for the international networks which have been so successfully extended by my students, who have enlightened me on many languages, and to whom I owe my greatest intellectual debts. Like my family, my students are now also scattered around the world and occasionally invite me to perform for their students. As with the most recent coincidence, in fact, which set me 'à la recherche de la cohérence perdue' in the form of this personal biosketch.