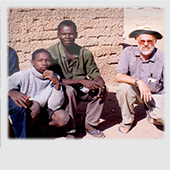 I tagged along with my parents at the age of 10 for a semester on the then-unspoiled Mediterranean coast of Spain. Your memory of an experience like that can imbue a foreign language (in your mind) with all sorts of exotic associations (rolling your r = beaches, subjunctive = seafood, etc.). I then had a good experience with high school language courses (Spanish and French). There were other subjects that I enjoyed in high school and had an aptitude in initially, but either my grades rolled off the table in senior year (math) or my interest waned (literature--I could never find the Christ symbols), so there was a process of elimination. I enrolled as a Linguistics major in my first week as a college freshman. The major was very small (4-5 students per graduating class), the teaching and advising were very good, and I never looked back.

The other thing was that my old man was a high school English teacher. When you are the child of an English teacher, you are going to have your grammar corrected on a daily basis from about the age of six. ("Bill and me are going downtown." "Bill and WHO?") Now I correct HIS grammar. Maybe that was the real reason I became a linguist--a Hamletesque mix of filial emulation and revenge.

I have studied and done fieldwork on many languages. At first the choices were accidental: taking Arabic instead of Chinese in college because I had nocturnal roommates and couldn't get up at 9 AM; encountering a Choctaw in New Hampshire and being invited to visit his community; getting a phone call out of the blue with a 3-year post-doc fellowship opportunity in Australia). After finishing up my Australian publications, I worked on several overlapping projects in Maghrebi Arabic, and since 1990 my fieldwork has been in northern Mali, working systematically from north (=Sahara desert) to south (Sahel), one language at a time. I prefer working on languages, and in regions, that other linguists haven't touched. My old man was also a baseball coach, and (as a spray hitter with no power) I learned early on to "hit 'em where they ain't."