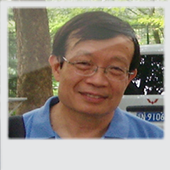 How did I become a linguist?

Regardless of my early discovery that thinking about the way language works can be intellectually satisfying, I actually became a linguist because, in large part, there were hands that pulled me out of situations where I would otherwise not be one.

I was born a farm boy in Taiwan, in a village that bears the highest number (965) in the zip code system used in that country (because it is the last place on the map anyone would think of). As a child, I was often able to choose between two types of weekend chores in the house: to help my father on the farm or to take the water buffalo out to graze on the slopes. I found the division of labor rather congenial: my brothers would help Dad plow the field while I would diligently take up the lighter job of attending to the buffalo. It also worked out pretty well, as I would enjoy riding on the back of the buffalo and, with a large straw-hat shielding the sun, reading books-comic books, story books, and a few years later also 'kungfu' novels and even some 'modern' poetry. I also learned to play the harmonica (like a cowboy) that my older brother bought me from the city where he attended high school.

When I left home for high school, I was fully interested in modern literature and by the end of the freshman year I launched a little literary magazine aimed at high school students. I was so focused on it that on the night before the final exams, I worked till morning at the printer's shop, pressing the workers to work overtime, so the magazine could be published and sold before the students would go home. I flunked every subject as a result and was sent home. After making serious promises to my big brother, I was 'released' from the farm and allowed to go back to school in the fall, where I had to repeat the freshman year. As a repeat, I wasn't looked upon favorably. But something happened that changed the situation. My father fell sick and no doctor was able to diagnose his problems. He had to move to the city to live with me in my boarding house, for further diagnoses at a nearby hospital. He stayed with me for almost a whole semester. Every morning my dad would awake me at 5 am (because that was when a farmer typically got up), and I had no choice. The result was that I ended up doing 2.5 hours' study before breakfast every day, while most other high school students were still in bed-and that became a habit for me for quite some more time. Among the outcomes was that I practically memorized a pocket English-Chinese dictionary, and more. At the end of my repeat year there was a school-wide English proficiency competition, and I knew I did well enough to possibly win the top prize, though strangely enough the result of the competition was never announced publically. Rumor had it that the teachers suspected that I (as a problem kid) had cheated at the test. I did finally receive the prize, retroactively (and not in public), later as a sophomore-presumably because I had proven myself by then. I went on to graduate with honors and a special admission-without-exam offer from the National Taiwan Normal University. I became the first child ever to make it to college from that village with zip code 965. (As for my father, after the doctors opened up his belly and saw nothing, they sewed him back and told him to go home, still with no diagnosis. Surprisingly, he got well-just like that, and lived on for 36 more years.)

In college, I learned of the discipline of linguistics at a top English department of the country. I had some very inspiring professors who got me excited at the fact that much of what was taught as given 'rules of grammar' actually could be explained by more general principles. Among them was a Fulbright visiting professor, Dr. Rudolph C. Troike, who somehow thought I should be sent to MIT for further training. However, at the time there were many obstacles in front of me-including military service and duties of high school teaching connected with my admission to Normal University. These obstacles detained me in Taiwan for 7 years, during which I could have given up the idea of coming to the US for graduate school, and followed a more lucrative career that was available to me but that I honestly did not enjoy. It was Dr. Troike who prevented me from giving up. Each year of the 7 years, he wrote to remind me of his confidence and of his expectation, and finally it was also he who brought to my attention my eligibility to compete for a Fulbright fellowship. He virtually refused to let go of me. After a series of other efforts, I managed to 'cross 5 mountain passes and slay 6 generals' (as the expression goes), and landed at Boston, Massachusetts.

When I showed up at Building 20, MIT had its first Taiwanese/Chinese graduate student in its Department of Linguistics and Philosophy. Jay Keyser gave me a warm welcome and Tim Stowell showed me around. Morris, Noam, Haj, Ken (Hale) and others told me I should address them by their first names. You know the rest.

Today, as I look back on the past 30 years and reflect on my career as a linguist, I feel a mix of nostalgia and gratitude. On the one hand, I remember my childhood, when I spent so many days imagining I was a cowboy sitting perched on top of my water buffalo, and in the company of my childhood friends - my fellow quail chasers and rabbit trappers. I sometimes wonder what that country boy from Village 965 would think if he knew that he would someday grow up to be a linguist, teaching at a university 12 hours' time zones away, on the other side of the globe. I remember my mother and father and my 6 brothers and sisters and I feel a sense of regret, as I have often felt that my visits home have been too few and far between through the years. One of my nephews told me that, during all those years when she could, my mother always had a space reserved for me at New Year's Eve dinner, with bowls and chopsticks on the table. It breaks my heart every time I think about it. On the other hand, I am humbled by an incredible sense of gratitude, for the many mentors who guided me towards a career that has been incredibly rewarding. My father woke me up at 5 in the morning every day and, because of his persistence, a high school dropout learned the value of hard work and became the first person in his village to attend college. Dr. Troike saw the potential in me to become a linguist, and he encouraged me to apply for the Fulbright scholarship every year for 7 years. His relentless confidence in me dared me to have aspirations I otherwise would not have even been able to imagine for myself. My professors and fellow students at MIT inspired and supported me and nourished my intellectual curiosity, helping me to grow as a person and a scholar. Today, I am happy to be a linguist and I hold in high esteem the many linguists I have been privileged to call my mentors, colleagues, students, and friends.