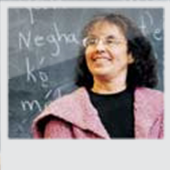 It is perhaps no surprise that I made my way into linguistics. As a child, I studied French in school, and as a high school student I was fortunate that I was able to study several languages. French and German were pretty standard courses at the time, and I was also able to study Russian and Mandarin. I lived in Ithaca, New York for two years when I was in high school, and was very close friends with some people who had fathers who taught linguistics at Cornell. I thus had some idea of what linguistics was while I was still a high school student. I also realized as a high school student that I was intrigued by the structure of the various languages that I studied. I thus entered my undergraduate years with some knowledge of what linguistics was, and I was excited that I had the opportunity to take linguistics. I took many linguistics courses as an undergraduate, enough to make me know that I wanted to study more of it. A few years ago I look back at my notes from some of those undergraduate courses and was surprised at just how much I had been exposed to – I felt that I would know much more than I do now if only I had understood and absorbed what I was introduced to then.

This pathway into linguistics is quite ordinary, and probably not very interesting. My pathway to fieldwork is perhaps more interesting. I studied Quechua as an undergraduate, and really liked it. But it was not a language I could continue with – I did not have the Spanish required, and there were not speakers of the language in Toronto while I was doing my Ph.D. One day a faculty member came in saying that he had heard about a speaker of a Slave dialect, and a group of people began to work with him. The rest is history – a group of us worked with him during the academic year, and two of us applied for a small grant to spend a few months doing fieldwork in northern Canada in the community that this person was from. And I have never stopped since then. Fieldwork satisfies many needs for me – to work with people, to challenge myself in new situations, to learn about other cultures, to do something beyond the purely intellectual work, something that might be helpful to others. It is not for everyone, but for me it meets needs that I think were instilled in me by my social worker mother!